Madeleine Ruthven: Poet of the Mountains

In 1934, Hollywood screenwriter and poet Madeleine Ruthven wrote a slender pamphlet of poems titled Sondelius Came to the Mountains. In it she captured the austerely beautiful back country of the western Santa Monica Mountains and painted a vivid portrait of some of the area’s early 20th century pioneers. Today, the book provides a tantalizing glimpse into an otherwise mostly forgotten past.

I first encountered Madeleine Ruthven in author Lawrence Clark Powell’s essay on living in Malibu called Ocean in View.  Powell stated that her poems describing the beauty and wildness of the western Santa Monica Mountains were one of the inspirations that brought him to Malibu. It would be years before I tracked down her poetry.

While I was researching a feature article on Ruthven and her poetry for Anne Soble’s Malibu Surfside News in 2010, I found that Ruthven was a pioneer woman screenwriter, a celebrated poet, a Los Angeles intellectual in the early days of Hollywood, a progressive activist, and a victim of the relentless communist witch hunt of the McCarthy era. I was fascinated and continued to hunt for details, but they were frustratingly scarce.

I found that Madeleine Bunch Ruthven was born in Iowa in 1894. In 1920, the US Census lists Madeleine, 26, living in Houston, Texas with husband Sam D. Ruthven, 35, born in Louisiana, and Ormond B. Ruthven, son, aged 10.

Sometime during the 1920s, Ruthven moved to Hollywood. She wrote title cards for silent movies, story treatments and screenplays for 16 film projects.

In the late ’20s, she wrote several westerns, including The Frontiersman. Unfortunately, this film like so many from the silent era, is lost. She also has  credits for writing title cards, an essential part of the silent era storytelling process.

Ruthven published two collections of poetry during the 1930s. Most of the poems first appeared in Rob Wagner's Script, a weekly literary and film magazine that Ruthven contributed to regularly. However, there is little record of her as poet or film writer in the papers of the time. Just a party in 1937 honoring English poet and novelist Ralph Bates, where she rubbed shoulders with celebrated writer William Saroyan and a glowing review of her first collection of poems, Summer Denial, published in 1932, written by journalist and activist Reuben Borough, whom she would later marry.

In the 1940 US Census, Ruthven is divorced and sharing a residence  in Beverly Hills with artist and studio architectural researcher Herta Uerkvitz. Both women were blacklisted by the House Un-American activities committee in the  McCarthy era.

Herta was an artist, poet and an architectural studio researcher. Like Madeleine, she was blacklisted. Herta appeared before the House Un-American committee on September 20, 1951. She took the 5th, rather than incriminate herself.

According to Robert Vaughn, in his book Only Victims: A Study of Show Business Blacklisting, Ruthven was denounced by "Mrs Meta Reis Rosenberg, former head of the literary department of Berg-Allenberg," who "introduced into the ‘Red’ record Ruthven 'ex-writer and CP Functionary in Hollywood and its environs.'"


Unlike many victims of the Hollywood witchhunt, Ruthven appears to really have been a member of the Communist Party. She was also a member of the Women's Shopping League, a socialist organization that promoted consumer and worker safety and opposed war profiteering.

Ruthven may never have worked in Hollywood again as a writer, but being on the black list didn't prevent her from continuing to work as a political and social justice activist.

She married journalist and fellow progressive activist Reuben Borough in the 1950s, after the death of Borough's first wife.  Borough set several of Madeleine's poems to music, according to documents held by UCLA, but no additional collections of poetry appear to have ever been published.


There's no record that I could find of when Ruthven visited Malibu. She must have come often in the early years when the newly constructed Roosevelt Highway first opened the area to visitors and adventurers. The finding aid for the Borough's collection lists letters from her that contain pressed flowers. There may be wealth of information on the Santa Monica Mountains within those boxes. She certainly knew the area well and loved it.

“Oh wild and lovely country! I am beginning to know you,” Ruthven wrote, describing the “white fire” of the yucca, the “golden tarweed, burned by the summer sun,” and canyons “veiled in a haze of mist-gray sage.”

When she first explored the mountains, they were a true wilderness, roadless and remote. Malibu and the western portion of the Santa Monica Mountains were accessible to the public for the first time only in 1929, when Roosevelt Highway—today’s Pacific Coast Highway—opened.

Ruthven celebrates a landscape of unspoiled vistas, abundant wildlife, caves that still contained Chumash pictographs, springs of water that were not only safe to drink but provided the only source of water for miles, and the rugged individuals who were the first since the Chumash to make the mountains their home.

Today, the backcountry attracts crowds hikers, bikers and rock climbers, but an early riser can still find the solitude that Ruthven and the settlers she described rejoiced in.

According to Ruthven, Dagon Sondelius was one who loved solitude. He once owned the ridge—600 acres of land—and lived in a cabin made of sheet metal:

On the crest of Boney Mountain
Where the parapet breaks
And all the world is spread like a map below.

According to Ruthven, Sondelius kept goats and made a hobby of collecting bottles. He was dead by the age of 30, but his goats lived on, veterans of a fire that reduced the cabin to ashes and melted Sondelius’s collection of glass into shapes of “strange fluidity.”

No trace remains now of cabin, but the view still spreads out at one's feet. On a clear day, one can see a panorama of mountains—the San Gabriels, the Topa Topas, and the Channel Islands—the farthest reach the Santa Monica Mountains—with the Pacific stretching away to the horizon. 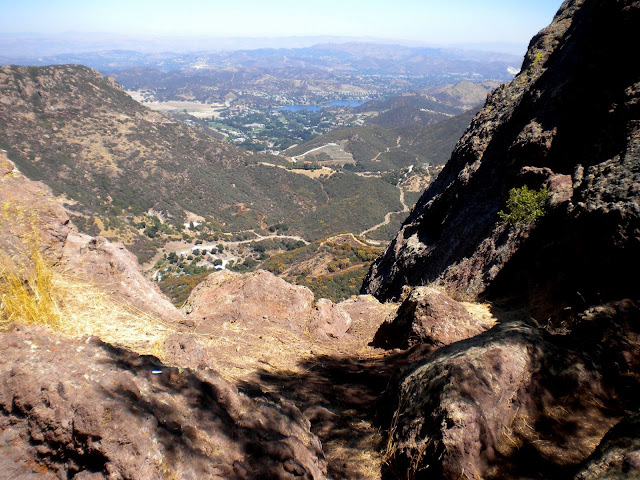 Other Boney Ridge characters described by Ruthven include Mary La Touche, an Irish woman who came west from Kansas with her husband to homestead in Big Sycamore Canyon, carrying all of her possessions and a month-old child over the rugged spine of the mountains during the heat of summer on pack mules and horses.

La Touche loved the backcountry and kept an inland cabin on Boney Ridge. In summer, when the springs dried up, water had to be carried in by pack mule.

When Ruthven knew her, La Touche,“weatherbeaten and rugged as the land,” still roamed the mountains on her mule, Benny, who was:

...Twenty years old,
As spoiled as a child,
And sleek as a cardinal's jennet...
There is scarcely a spot in these hills
Where Benny and Mary La Touche
Have not traveled...

One of the anecdotes presented by Ruthven is an account of La Touche, her five-year-old son Edward and fellow pioneer Walter Haines who became lost in a maze of arroyos while exploring Triunfo Canyon. They spent a cold and uncomfortable winter night on a boulder above the raging floodwaters in the creek without food or blankets. It was almost night on the following day when they finally found their way home.

Haines, a refugee from the city, lived in a tin shack in a canyon “Where trees grow, and a spring trickles,/ And a gray cat purrs in the doorway.

In Ruthven's time, the residents of the area called the massive stone “face” above Trifuno Canyon “Walt’s Old Woman,” in honor of the canyon hermit.

Ruthven knew Edward La Touche at 15, “competent, strong, unhurried,” a “true child of the hills.” The La Touches, mother and son, arranged horses for Ruthven and guided her and other visitors through the mountains.

Ruthven’s poems appear to provide the only surviving record of the rugged mountain characters like Sondelius, the La Touches, and Walter Haines. The names may have been changed but it's clear that they were real people, members of the tough and self-sufficient homesteader community who carved out a precarious life for themselves, a sort of corner of the wild west, without roads, electricity or running water, in the early years of the 20th century.

She also provides a description of fire in the mountains, and its after effect on the environment and the people who made the area their home.

When we came to the crest of Boney Mountain
All the lower hills and the sea were hidden
Under a cloud of fog.
Mountains and valleys and plains of cloud
Glistening pearl in the moonlight.

We turned to the north and east.
Sixty miles away we saw the mountains burning
In Santa Barbara and Ojai—
White plumes of smoke billowing over the ridges,
And a black wall of smoke,
Smooth and solid as basalt,
Thrust seaward into the horizon.

They have known fire in Yerba Buena, too,
They have faced fire and survived
Stripped and scarred, but still alive,
Ready to begin anew.

Two years ago fire came here.
It licked the thick brush from the high hills,
And filled the canyon with flame.
It leaped from the great parapet of Boney Mountain
And swept the slopes below.
The hill people fled before it.
They left the roads, arched with fire,
And followed the wild things
Seeking safety in the water courses.
The fire roared after
And did not pause in its ravening
Until it came to the sea's edge.

Then the folk went back to the blackened smoking hills.
They had nothing left but their courage
And the stoic strength of the harsh land
Under their feet.
They had no assurance
Save the promise of the rain
And the surety of the seasons
To bring life back again.
They went back—
They belong to the hills.

The people Ruthven described are gone, but if she were alive today she would find the area around Boney Ridge that she lovingly described in verse still recognizable. Her voice remains alive in the poetry that reveals her deep love for the Santa Monica Mountains.

This was the summer when I came to know,
After long years,
My love for these brown hills,
And learned the peace
Their stony harshness brings,
And felt their beauty singing in my blood.

Now in October, warm and dusty-hazed,
I wait serenely for the winter rains
To fill the parched and stony waterways,
Knowing that Spring will follow
In a blaze—
Green fire of grass,
Blue flame of lupin bloom,
And poppies burning on the bare hillsides.


Sondelius Came to the Mountains is out of print and can be hard to find-apparently only 200 copies were printed by the Primavera Press in 1934-but the book occasionally turns up second-hand.

The mountains that inspired Ruthven’s poems are still right here in Malibu’s backyard, and continue to invite exploration and reflection.


Posted by Suzanne Guldimann at 12:58 PM No comments: