The ancient Greeks are said to have poured oil on troubled waters to calm the sea, possibly as an offering to appease the god Poseidon. In the era of wide-scale petroleum production, Poseidon would more likely be dismayed than pleased by the toxic sludge by the oil industry, like the pipeline leak in Santa Barbara County that dumped more than 100,000 gallons of crude into the ocean on May 19.


It’s deeply depressing to yet again witness the Santa Barbara coast awash in crude oil that is endangering and killing the birds, fish, sea lions, dolphins, and other marine life that so many have fought to protect with legislation and the creation of marine protected areas, since the catastrophic 1969 Santa Barbara oil spill galvanized the environmental movement in California.

The first Santa Barbara oil disaster occurred at a critical moment in history for the oil industry in Southern California.  Thousands of offshore oil leases were in play in the late 1960s—including more than 3000 in the Santa Monica Bay. That spill was a wake-up call. No one wanted to see a disaster of that scale happen again.

The battle against oil platforms in the Santa Monica Bay was one of the first fights my parents threw themselves into in Malibu. They moved here the year of the spill and saw the aftermath of 11 million gallons of crude oil first hand. Although Santa Barbara and Ventura counties and the Channel Islands received the brunt of the damage, oil washed ashore as far south as the Mexican border and plenty of it ended up in Malibu.

My mom remembers going to those meetings. “They told us they would paint the rigs blue, to match the sky,” she says. She also remembers the tar on the local beaches following the Santa Barbara spill. A bottle of nail polish remover was always in the beach bag with the sun screen and the towels.

There are natural tar seeps in Malibu that were used by the Chumash as glue and to seal the seams of their boats, but the naturally occurring oil is never seen today in the amounts that washed up along the Malibu coast in the years following the Santa Barbara spill.

Malibu was spared the industrial pollution experienced by many of the other Southern California beach communities during the oil bonanza of the early 20th century, but even this remote and inaccessible stretch of coast wasn't immune to the oil fever that swept the west in the 1920s and I was surprised to learn the extent of oil exploration in the area.

Many longtime Malibu residents know the story of the Rindge oil rig on the top on Point Dume, constructed in 1924, but there was a second Point Dume oil well that was installed in 1940 and apparently abandoned in 1943. It appears that this second site is now under the garden of a well-known and highly respected musician. I wonder if he knows what is under his feet?

Records also reveal a well in what is now Charmlee Wilderness Park, and another, drilled in 1929 and plugged in 1930, down the street from Malibu High School. I was disappointed not to find any material on this well in the recent environmental reports released by the Santa Monica Malibu School District as part of the district's research on the site for the toxic substance clean up work plan that is being developed. The well location is near, but not on school property, which probably accounts for the omission. Although this is one of the only wells on the Malibu map that is listed as oil producing.

I was especially fascinated by two wells in Carbon Canyon (the source of the name, perhaps?) Both were drilled in 1924 by “Rieder Haag” and apparently abandoned. A survey in 1964 for the sites uncovered “no evidences of any old wells, or location, or oil, or gas, or water seeps.”

The 1964 inspector speculated that one well may be under the parking area of the Carbon Canyon fire station. The map places the second well, described as 605 feet deep, under a massive house on the hill overlooking the highway.

A notice of intent to drill form, dated 1923, describes the site as “2 lots, lands of Mathew Keller, east of Carbin [sic] Coal Canyon." A typed note reads: “this [is] wildcat country.”
That doesn’t refer to mountain lions or bob cats, but to oil exploration in an unproven area.

Two sites in a remote portion of the Santa Monica Mountains above Charmlee deep in Encinal Canyon are also listed as wildcat wells. Both appear to have been drilled in 1923. How the crews lugged drilling and derrick equipment up the canyon is anyone’s guess. That area is still remote. 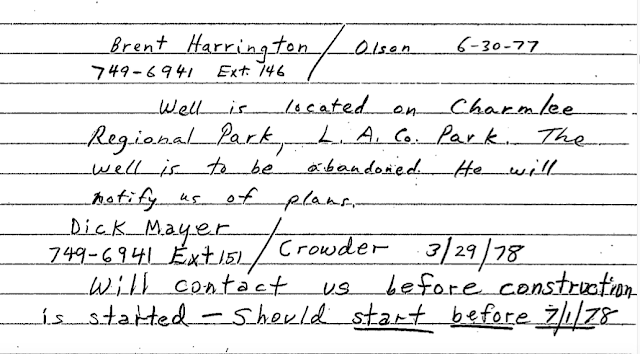 Here's the well inspector's note from a report on the Charmlee area well site in 1978. Another report indicates that neither this well nor the other two Encinal well sites were ever located.

An inspection in 1977 failed to find any trace of the Encinal wells. None of these wildcat wells appear to have yielded anything, but it’s interesting that, as of 2005, Chevron still apparently held the lease on two wells in the Decker Canyon area. The first of these was drilled in 1957 for the Gulf Oil Corporation.

A Division of Oil and Gas report on proposed operations dated August 8, 1957, reveals that the wells were located on a mineral rights lease of 470 acres, and that the depth of the first well is listed as 7000-7500 feet.

A map accompanying the claim shows parcels tagged by oil companies Franco Western, Texas, and Standard,  scattered among the more familiar names of the local settlers, like the Deckers and the Kincaids.

These early wells may not have yielded results, but they were just the beginning. A quick survey of the California Division of Oil, Gas and Geothermal Resources Well Finder reveals 25 well locations in the Malibu area. During the 1960s and 70s, the big oil companies began drilling test wells off shore.

Chevron filed drilling reports for a site off Bluffs Park in 1970, which appears to have been previously owned by Standard Oil in the 1950s. There was a test well off Puerco Canyon in 275 feet of water drilled by Shell Western Exploration and Production, Inc. in 1969.

Exxon Mobile drilled a test well off the coast at Paradise Cove in 189 feet of water in 1970. There is a “notice of intention to drill” form dated 1965 for this site stamped “prospect well confidential, please do not publish," but the lease expired in 1998 and the data was released, along with a memo that states that the well is near other state and federal leases, despite the fact those leases were technically placed off limits in 1994.

An August 28, 1974 Los Angeles Times article states:  “[The] Assembly asked the U.S. government not to consider leases for 5,000 offshore oil wells between Laguna Beach and Malibu until a Federal Energy Administration report [is completed]." Drilling was stalled, at least temporarily.

The lobbying power of the oil industry could not combat the anger and determination generated by the 1969 Union Oil platform disaster. The tar fouling beaches, rocks, and marine life along miles of coast was a constant reminder of the disaster that could not be ignored, but not for want of trying.
A renewed push for drilling in the 1980s resulted in the federal government authorizing 37 vast offshore lease areas from Point Mugu to Santa Maria.

In 1994, the state passed the California Coastal Sanctuary Act, which “declares that offshore oil and gas production in certain areas of state waters poses an unacceptably high risk of damage and disruption to the marine environment of the state.” That act protects the coast, including the Santa Monica Bay, from new oil drilling projects, but there is a major loophole.

The Act “authorizes the State Lands Commission to enter into a lease for the extraction of oil or gas from state-owned tide and submerged lands in the California Coastal Sanctuary if the commission determines that the oil or gas deposits are being drained by means of producing wells upon adjacent federal lands and the lease is in the best interest of the state.”

There are still thousands of active and potential wells in Southern California and conservationists are concerned that the oil industry, which has a bottomless war chest for lobbying, will eventually find a way to exploit that loop hole, leaving the coast vulnerable to future drilling projects.

“Tuesday’s devastating oil spill is yet another example of the significant dangers related to coastal oil development,” McGuire said, in a press release. “Our thoughts are with the residents of Santa Barbara and all of those who are working hard on the recovery efforts.”

Malibuites can help by signing the Change.org petition supporting the measure, and by calling their representatives and asking them to support SB 788.

Santa Barbara’s wildlife also needs our help. The International Bird Rescue's oiled bird team at San Pedro is currently assisting with the de-oiling effort but depends on donations to carry out this work. You can also follow their Refugio efforts on the IBR Facebook page.


It only takes a minute to sign and share a petition, or call or email our officials, but with enough support it can make an impact.


Animals are going to die as a result of this spill, despite the best efforts of rescuers. Dolphins, sea lions, seals, birds, lobsters, fish, zooplankton so small it isn't visible to the human eye, and ocean giants like whales and elephant seals will all be impacted. That's the grim reality of an oil spill this size. It will take years for this spectacular stretch of California Coast and all the biodiversity that makes its home there to recover.

However, out of this disaster an opportunity to prevent future oil spills is emerging. This doesn't have to happen again, not in Santa Barbara, or Alaska, or the Gulf of Mexico, not if we all work together for change. We are constantly barraged with bad news and tragedy on an epic scale, but this is one of the times when we can help create meaningful change. 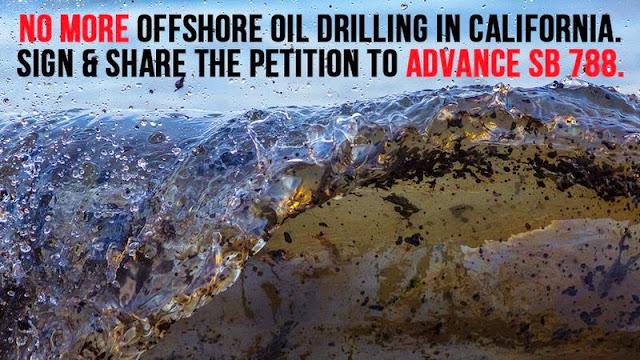 Posted by Suzanne Guldimann at 6:15 PM