"Not long ago—incredible though it may seem—I heard a clerk of Oxford declare that he 'welcomed' the proximity of mass-production robot factories, and the roar of self-obstructive traffic, because it brought his university into 'contact with real life.'

"He may have meant that the way men were living and working in the twentieth century was increasing in barbarity at an alarming rate, and that the loud demonstration of this in the streets of Oxford might serve as a warning that it is not possible to preserve for long an oasis of sanity in a desert of unreason by mere fences, without actual offensive action (practical and intellectual). I fear he did not.

"In any case, the expression 'real life' in this context seems to fall short of academic standards. The notion that motor-cars are more 'alive' than, say, centaurs or dragons is curious; that they are more 'real' than, say, horses is pathetically absurd. How real, how startlingly alive is a factory chimney compared with an elm tree: poor obsolete thing, insubstantial dream of an escapist!"

I like to think the Professor would have harsh words for a certain developer’s plan to remove an ancient sycamore tree from the side of Pacific Coast Highway, where it has grown since before the road was built. Everyone who has ever driven through Malibu has driven past that tree.

I’ve been reading the supplemental Environmental Impact Report for the road widening project that is part of the La Paz shopping center development plan. In order to build the new 112,000 square-foot mall on undeveloped land next to the Malibu Library, PCH has to be widened to accommodate a longer/bigger turn lane for Cross Creek Road.

EIRs are, unfortunately, a kind of game. Instead of being a tool to identify and solve environmental issues, all too often they end up being a collection of lame excuses.  The environmental community likes to say the developer hires a biologist to go out and sit in their car with the windows up, their eyes closed ,and their fingers in their ears, who will then report that they didn’t see or hear anything.

The Millennium project in Hollywood is a great example of this sort of “we didn’t see it so it isn’t here” philosophy. The developers proposed building two massive apartment towers on a major earthquake fault. You can read about it here.

It’s not usually quite that bad in the Malibu area, where the California Coastal Act and the local coastal program developed as a result of it, temper to some degree all projects. Although one recent EIR used a special concern plant and animal species list from another part of California—a handy way of making sure you don’t find anything on the list.

The most spectacular omission lately is the site of a proposed housing development with Chumash artifacts in plain view on the surface. The Sierra Club brought in a local expert after the EIR preparers found nothing. The outside expert reported his finds to the Coastal Commission. It's hard to fathom how the expert hired by the company preparing the EIR somehow failed to notice he was standing in the middle of an archeological site. Perhaps there was a communication failure. Something like: “Oh, artifacts! I thought you wanted me to look for aardvarks.”

In the La Paz EIR, the authors try to slide past the sycamore removal controversy by describing the massive tree as a “41-inch sycamore.”

If one goes to see “Attack of the 50-Foot Woman," one is expecting to see a movie about a giant. When one reads about a “41-inch tree,” the visual that is conveyed is a tree shorter than the average adult human.

In this case, the measurement is intended to indicate not height but diameter. However, one suspects that the authors of the EIR wouldn’t mind in the least if it makes the tree seem diminutive.

Here's a quote from the introduction section of the EIR document:

I don't see the word diameter in there, do you? It is mentioned later, once, on page four, but the initial and almost consistent omission throughout most of the document makes it sound like a small tree.


The EIR never mentions that there are two stems of nearly equal girth. What that 41-inch diameter measurement means is that each stem of this tree has an almost 11-foot circumference. Diameter = circumference divided by pi: it’s the distance through the trunk, not around it. Describing this tree as a “41-inch sycamore” is disingenuous.

The developers propose to replace this tree with 10 one-gallon seedling trees. The problem is, none of these trees will replace the existing giant in our lifetimes, because the tree that is scheduled for destruction is old—a true heritage tree.

Using the US Forestry Service’s formula (using stem diameter, height, canopy dimensions and the estimated growth rate for the species) to determining the age of a tree—a challenge because one stem grows horizontally, yields a result that indicates this tree is around 160 years old.

The date is an educated guess, based on the size of the tree and the known growth rate of the species. If it’s accurate, this tree has survived fires, floods and the construction of the highway. It would have sprouted during the 1850s, the era of the California gold rush. The Malibu Rancho was still a Spanish land grant property in the 1850s, belonging to French settler Leon Victor Prudhomme. This tree would have been fully grown when Frederick Hastings Rindge purchased the rancho in 1892. When PCH was constructed in 1929, it may have already been nearing the century mark.


One thing that can be documented beyond the shadow of a doubt is the presence of a large tree in that location in aerial photographs. The oldest aerial photo I could find is from 1924, shown above, but one can track the tree through the decades at the UCSB aerial photography archive, beginning in 1929, the year PCH was constructed.


Malibu has a dismal record on historic preservation. While much of the most egregious destruction occurred before the community incorporated as a city, we’ve allowed developers to bulldoze and demolish our heritage—Chumash sites, ranch-era buildings, WW II history, mid-century modern architecture, and natural resources, including ocean views, open space, ridgelines and trees.

Frederick Hastings Rindge, who bought the Malibu Rancho from Matthew Keller in 1892, wrote about a number of local heritage trees:

One great oak in Ramirez Canyon, of massive size and great gnarled trunk, we call  Abraham’s Oak, in remembrance of the ancient oak in Palestine of the same name, so called because it was thought to have lived in Abraham’s day. Many the time have I wished that grand old oak to make me his confidant and revel the secrets of the past.

In Soston [Solstice] Canyon about twenty-five young oaks are growing close together, and their tops blending in foliage make a great umbrella-shaped roof, a fine house. The birds love these trees.

In Trancos [sic] Canyon I know a noble oak whose boughs almost reach the ground, and on all the branches, even the lower ones, within your reach, are scores of nests. It is really a compound bird-nursery.

None of these trees are there now.

Trees are a lot easier to cut down then they are to grow—hundreds of years of living history can be obliterated in minutes with a chainsaw.

The sycamore isn't the only tree scheduled for demolition on PCH at the lagoon. Part of the row of 70-year-old eucalyptus trees that for more than three generations have provided shade for surfers and other beachgoers parked on PCH are headed for the chopping block. Like the sycamore, you can trace their history in the aerial photography record. Unlike the sycamore, they aren't native trees, but they are large and old and picturesque.


I'll miss them when they are gone. The surfers will miss the access to free parking underneath them, along the stretch of highway closest to the Malibu Lagoon State Beach entrance, which apparently is also going to be a casualty of this project.

The road widening project may or may not help with the traffic situation in the Civic Center area. It would be nice if the plan could be completed in a way that doesn’t require the destruction of the sycamore or the eucalyptus trees.

It will be unfortunate if the trees are removed and the city decides to adopt the Civic Center Design Standards Task Force’s idea of making the traffic on Civic Center Way and Cross Creek one way only, negating the necessity for the removal.

It’s depressing that developers continue to have the financial leverage to push ill-conceived projects through, while environmental and conservation activists struggle on shoestring budgets.

It would undoubtedly be a better world if developers and their investors could learn to care about more than the bottom line, but it probably isn’t realistic to expect some kind of epiphany, not when the "apostles" preach the gospel of "iconic brands" (what does that even mean?). However, it is still not too late to save the trees.

The Planning Commission hearing on this phase of the project is scheduled for June 2 and the public comment period is open until May 21. The entire document is available here.

Comments can be submitted to:

Many of us who love Malibu see it as the Professor saw Oxford, as "an oasis of sanity in a desert of unreason." Some days it feels like that desert is encroaching on us despite all of our efforts to hold it back, but that doesn't mean we can't keep fighting for the things that are important. 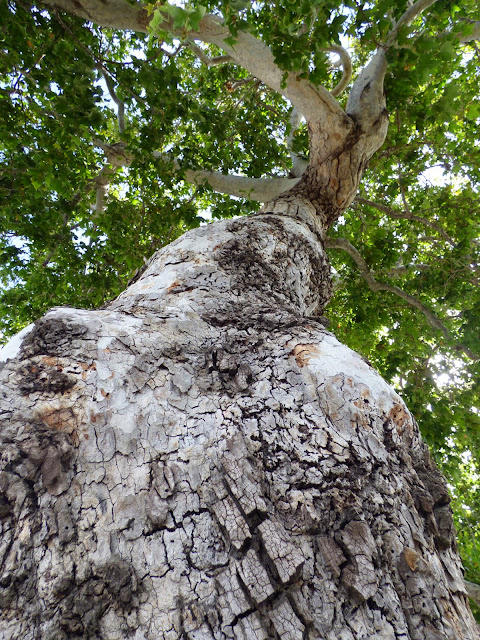 Posted by Suzanne Guldimann at 12:51 PM