A Reprieve for the Trees


Hui-tse said to Chuang-tse, "I have a large tree which no carpenter can cut into lumber. Its branches and trunk are crooked and tough, covered with bumps and depressions. No builder would turn his head to look at it..."

Chuange-tse replied, "You complain that your tree is not valuable as lumber, but you could make use of the shade it provides, rest under its sheltering branches, and stroll beneath it, admiring its character and appearance. Since it would not be endangered by an axe, what could threaten its existence? It is useless to you only because you want to make it into something else and do not use it in its proper way.”—Taoist parable, interpreted by Benjamin Hoff


On June 15, the City of Malibu's Planning Commission voted unanimously to give the embattled Cross Creek sycamore and five eucalyptus trees a reprieve, sending the developers of the La Paz shopping center back to the drawing board and the negotiating table to come up with an alternative to bulldozing the trees.

The PCH road widening proposal is part of the traffic mitigation required for the La Paz mall. The applicant, who sought to widen PCH on the ocean side of the highway to accommodate a turn lane on the land side for the 112,000-square foot La Paz development, was denied permission to remove the trees. At this point, the trees cannot legally be touched without an amendment from the city.

Malibu activists from all walks of life and all ends of the political spectrum joined together for a rally in front of the sycamore tree before the meeting. They waved signs, covered the trees slated for destruction with paper hearts and messages, and shared their concerns with each other and with the afternoon peak-hour traffic.

Many of the protestors headed straight to Malibu City Hall after the rally, for the standing-room-only meeting where the fate of the trees would be determined.


The planning commission heard over three hours of testimony. It’s not surprising that the only people in favor of bulldozing the sycamore and the row of eucalyptus trees on PCH to build a bigger turn lane to accommodate the La Paz shopping center traffic were paid consultants and a couple of pro-development activists, the ones who never miss an opportunity to promote their agenda, but are at least our resident pro-development activists, and not nameless, faceless suits from corporate headquarters.


What was surprising was the fact that the Caltrans representative, a senior planner who is paid nearly $103,000 a year plus a $42k benefits package, according to the Transparent California website,  could only justify the removal of the trees on the basis that they are a potential safety hazard because somebody someday may crash into one and die, despite the fact that none of these trees have even been the cause of any major traffic accident in the 86-year history of PCH, as far as the Malibu Post’s research has been able to determine.

“It’s a couple of feet, can’t you do something?” Planning Commission Chair David Brotman asked the Caltrans representative.

“If I’m being honest, maybe in the future, someone will come to me and say ‘why didn’t you just add those two feet and save my daughter or save my son?’” the Caltrans spokesperson replied.

That’s it? That's the big argument for removing a historic tree that has grown in its current location since before Pacific Coast Highway was built?

Why wasn’t this highly paid expert advocating for the removal of power poles, fire hydrants, too? Unlike these trees, power poles and fire hydrants have been a significant factor in numerous fatalities and serious accidents on PCH.

No one is saying that PCH isn't dangerous, or that accidents aren't a frequent issue, but there is no evidence to support the contention that the trees are a traffic hazard.

If the main argument for removing the trees is to protect us from ourselves at some unspecified time in the future at an intersection with a low rate of injury accidents, maybe we should just wrap the entire 27 mile stretch of PCH in bubblewrap.

The people who are dying at the corner of PCH and Cross Creek Road? Really?

PCH was built in the late 1920s and only reengineered once, in 1949. Very little of it is up to the ever-evolving 21st century Caltrans standards, and many areas have major safety issues. The Cross Creek intersection isn’t one of these. It experiences severe congestion, not fatalities or even serious injury accidents.

This traffic measure was proposed as a congestion measure, not a safety measure. The developer is required to include the turn lane to accommodate an increase in car trips not to save us from the horrible threat of trees.


When did this pearl-clutching oh-the-humanity argument enter the conversation? Those same hypothetical children that will be killed by the trees could be injured in a Little League game or on the playground of their grade school. Should we also ban sports and kindergarten because an accident could happen?

The applicant's representative stated that he tried to work with Caltrans to find another solution but was unsuccessful.

It’s hard to believe that anyone who would write off this massive, ancient sycamore that has two 12-foo-diameter trunks as a “41-inch tree” put a lot of effort into plans to save it, but perhaps they just didn't talk to the right people at Caltrans.

While it's true that for decades Caltrans was as remote and inaccessible as the moon, that’s changed in recent years. The agency was responsive to safety concerns following the death of 13-year-old Emily Shane in 2010. The agency is actively working with National Parks and conservation agencies to build a wildlife overpass at Liberty Canyon on the 101.

Caltrans is also beginning to entertain the idea of new approaches to traffic flow, including measures like narrower lanes to encourage drivers to slow down, a traffic calming measure that is one of the proposals floated for western Malibu in the city's new Pacific Coast Highway safety study.

In recent years, Caltrans has repeatedly exhibited willingness in other communities to work around landmarks and sensitive areas. Why can’t they do that here in Malibu?


Now that the community and the city officials have made it clear that saving the trees is a priority, we can hope the developers will make a stronger effort, but it is up to the community to keep them on track.

This project’s representative is a Malibu area resident, but the investors aren’t. They are a collection of mostly out of state corporate interests whose priority appears to be securing the permits for the property and selling it, presumably to other vast, impersonal out-of-state investors. It's unlikely that any of these people follow local Malibu news closely.

According to the website  Corporation Wiki, Malibu La Paz Ranch, LLC, is headquartered in Chicago, Illinois, and is comprised of hedge funds and investment interests.

The owner of "The Park at Cross Creek, LLC" development (the LLC for the project apparently no longer has "Whole Foods" in its title), which is located next door to the La Paz property and also dependent on the PCH widening project, is even more vast and faceless. Rumor has it, the majority controlling interest in this property belongs to Fortress Investment Group, LLC,  "a leading, highly diversified global investment management firm," according to their website.

It stretches one's suspension of disbelief to the breaking point to image that hedge funds care one iota about trees, or, for that matter, people.

However, even the largest corporation is run by humans, not by computers, not yet at least. Perhaps now that they have been made aware of how much these trees mean to the community, whoever runs the show at Malibu LaPaz Ranch LLC will be willing to put some effort into finding a solution everyone can live with. It’s in their interests to appear responsive to the needs of the community.  It would be a good legacy, a better one than giving the impression of being the Evil Empire [TM].

“I think the city is getting very close to a breach of the development agreement,” the La Paz representative said at the planning meeting. It didn't have quite the campy panache of Darth Vader's "Tear this ship apart and bring me the ambassador, I want her alive," but for many in the audience it came out sounding like that, whether or not the speaker intended it to.

“I appreciate that you’ve spent four years [on this plan], we’ve spent four hours, so you’re going to need to give us a little more time,” Commissioner Mikke Pierson replied. The commission deliberated at length before voting unanimously to oppose the removal of the trees. They requested that that applicant return with a solution that spares the trees and the parking.


The Planning Commission's  unanimous decision provides an opportunity for everyone to work together to find a viable solution, one that preserves the trees and the character of the community, instead of the corporate interest of a collection of out-of-state hedge funds.

Longtime Malibu resident and local architect Lester Tobias had this to say about the sycamore at the planning commission meeting:

"This sycamore was a seedling when our nation fought the civil war. It was not planted. It found its way to the creek's end and began its life. It hasn't killed anybody. It hasn't caused any accidents. It is not a fire hazard. It is innocent. It saw Malibu grow up. It saw the great depression, prohibition, and two world wars. It saw May Rindge fight the government. It saw the Malibu pottery tiles being made. It saw Alan Sarlo shoot the pier on big Wednesday last year...It has survived fires, floods, channel dredging, bridge building, and the original Malibu Little League fields. It is Malibu's witness tree. Although it is owned by no one, it resides on State Park property. This makes it the People's Tree. And since it resides in Malibu, it is Malibu's tree. And you are Malibu's Planning Commission and I can not see how any of you can vote to kill our tree, our witness tree, Malibu's tree, so some guy can build an office building." 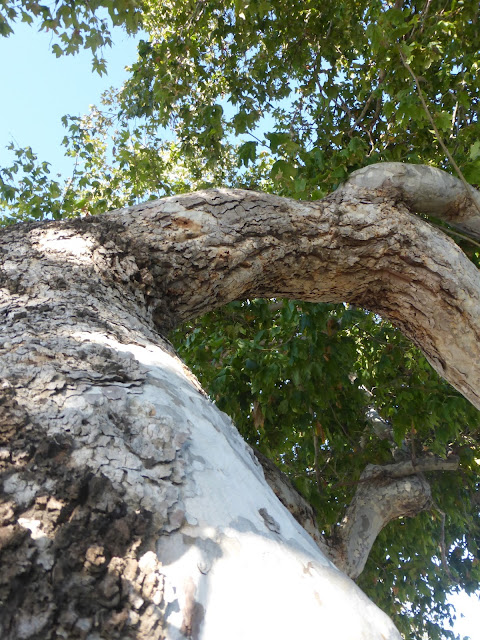 Posted by Suzanne Guldimann at 12:31 PM