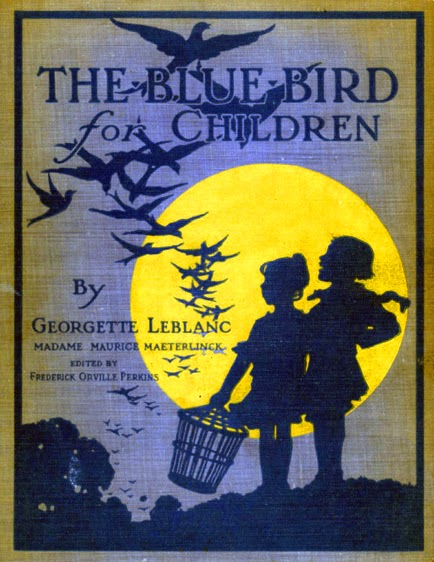 There, I give you all I have to help you in your search for the Blue Bird. I know that the flying carpet or the ring which makes its wearer invisible would be more useful to you.... But I have lost the key of the cupboard in which I locked them....

I grew up under the spell of The Bluebird. The children's version of Belgian symbolist poet and playwright Maurice Maeterlinck's 1908 play is of my mother's cherished childhood books, and she read it to me often when I was small. In the book, the children Myltil and Tyltil travel to the Land of Memory, the Palace of Night, and even to the Kingdom of the Future, in search of the elusive bluebird of happiness.

That's the cover of my mother's book, above. Myltil and Tyltil, cage in hand, set out to find the bluebird, guided by the personification of Light and aided by a magic diamond that enables the wearer to see the true nature of all they behold.

My thoughts strayed to The Bluebird as I set out last weekend to count birds for the Great Backyard Bird Count. The count is an exercise in citizen science, the play is a symbolist allegory, but Maeterlinck might have argued that everything is an allegory, and that both philosophies seek to uncover what is perceived as the true nature of the world, so perhaps it isn't strange for the two things to overlap.

The Bluebird in mind, here's where my journey took me:

Posted by Suzanne Guldimann at 12:00 PM