It feels more like October than May this week. Gale force Santa Ana winds and temperatures in the 90s  have raised the red flag for fire danger and sent crowds to the beach, braving sand-blasting to seek relief from the heat, but before the winds blew in there was one perfect day for surfing.

You could tell the surf was up without even seeing the ocean. The Chumash name for Malibu—Humaliwu, "where the surf sounds," was well chosen. When there's a powerful swell the sound of the surf forms a dull roar in the background of the lives of anyone within a mile or so of any of the major local surf breaks.

Another sure sign of surf is the mob of cars parked along PCH at Surfrider, Leo Carrillo, Nicholas Beach, as hopeful surfers skive off work or school in search of waves. They were double-parked at the Malibu Lagoon, but a car pulled out just in front of me and, on a whim, I stopped and joined the rag-tag army of wetsuit-clad surfers heading for the beach.

"Not surfing today?" the guy behind me asked.

"Just taking some pictures," I replied.


The surfers took the quickest route to to the shore, but I stopped to admire the kayak of an audacious explorer, drawn aground near the parking lot. Later, I saw the kayaker paddling lazily around the lagoon. The sand berm is closed right now, transforming the newly re-contoured and enlarged wetland into a kind of brackish lake that is ideal for kayaking, even if it isn't an activity State Parks necessarily approves of.

I also watched the crow carefully picking its way along the edge of the water, looking for breakfast. A few minutes later, I saw him again, harassing a black-crowned night heron at her nest on top of a ficus tree in a Malibu Colony garden adjacent to the park. Later, he was down on the beach, on the lookout for unattended picnics.

There was no silent end-of-the-world-evoking emptiness at the beach. Instead, an astonishing number of California Brown pelicans were gathered on the lagoon sand berm. I've described Surfrider Beach before as a kind of miniature Jurassic Park. Being on the beach with hundreds of pelicans is about as close as it gets to seeing live pterasaurs. Pelecanus occidentalis is on the smallish side compared to other members of the pelican family, but this bird is still a giant, with an 6-8-foot wing span. The distinctly prehistoric looking bill can grow to be more than a foot long and the throat pouch can reportedly hold up to two gallons of water.

The pelicans, grave and silent, were joined by a huge,  raucous flock of terns, their shrill voices rising above the sound of the surf. California brown pelicans are a rare conservation success story, rebounding from the edge of extinction in the 1970s. The terns' fate remains less certain. They are a California species of special concern due primarily to habitat loss.

I walked back along the old Adamson House wall. When you see it in surf movies, it's always the side that faces the ocean, although a section of it is missing now, torn down after a truck smashed into it, and it's blotched with mismatched paint, where State Parks has painted over years of graffiti. This is the land side. It's in better shape and still decorated with bits of Malibu Potteries tile. 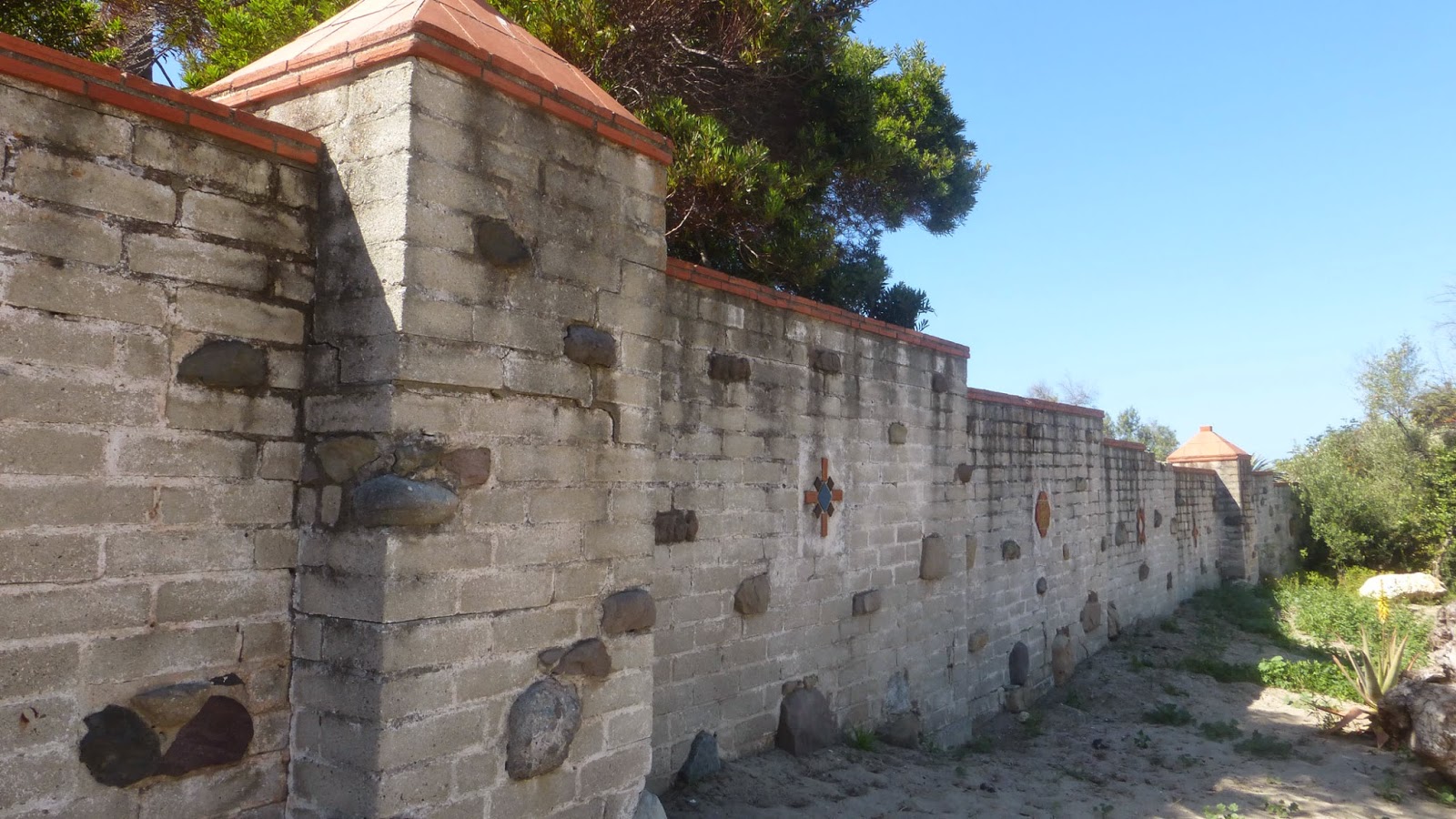 Posted by Suzanne Guldimann at 10:10 PM