Mr. Toad’s Day at the Beach, or How the Automobile Changed Malibu

Glorious, stirring sight! The poetry of motion! The real way to travel! The only way to travel! Here today—in next week tomorrow! Villages skipped, towns and cities jumped—always somebody else's horizon! O bliss! O poop-poop! O my! O my!

—Kenneth Grahame, The Wind in the Willows, 1908

Oh, Toad. Canary-colored cart, patient horse, friends, river and home forgotten, all care and caution tossed to the wind at the seductive sight of his first motorcar. It must have been that way for many, not just Scottish author Kenneth Grahame’s infuriating but endearing character who first appeared in print in 1908.

The automobile craze came early to Los Angeles. The Automobile Club of Southern California was founded in 1900.  According to Richard Mathison’s fascinating 1968 history of the Auto Club and SoCal car culture, Three Cars in Every Garage, the population of the LA area had burgeoned to 350,000 people that year. The City of Los Angeles went from 11,183 in 1800 to 102,478 in 1900. Mathison writes that a total of 4192 cars were manufactured in the US in the first year of the 20th century. Advocates for alternative fuel vehicles in the 21st century might be amazed to find that less than 1000 of those vehicles were powered by gasoline. The rest were steam and electric.

In 1909, the State Highways Act was passed, allocating $18 million in bonds to create a  “continuous and connected highway system.” The first stretch of highway was built in 1912. Things would never be the same.

According to Mathison, the Auto Club grew from "a few hundred enthusiasts" in 1906, to "3200 serious motorists" in 1911. The organization began publishing maps and tour books in 1909, encouraging motorists to take to the roads in search of adventure and a grand day out.

The Auto Club also became a powerful voice lobbying for new roads. motorists began to clamor for a highway through the exclusive, entirely off-limits Malibu Rancho. It would be 1929 before that road was built, but that didn't stop early motorists from pushing the boundary. As early as 1915 there were maps promoting road trips to the Las Flores Inn—it's Duke's Restaurant now and was the Sea Lion when I was growing up.

Las Flores was the end of the road for motorists, the ranch gate that's at the top of the Malibu Post's home page was located there, and uninvited visitors to the ranch were not welcome. Instead, motorists might opt for a round trip adventure along the coast to Topanga Canyon, up the narrow, winding mountain road and through the vast unexplored San Fernando Valley to exotic destinations like Van Nuys, before heading home through the Cahuanga Pass. The Auto Club printed a map for just such an adventure in 1915.

We have the map, but before we begin our motoring adventure, here are a few points of etiquette for motorists, c. 1901:

Motoring is a stimulating and rather dangerous amusement. When not overdone, it is healthful and pleasant. Ladies should wear warm wool garments free from encumbering draperies, with heavy shoes and sensible gloves. Her escort should provide a protective duster and goggles. No young lady should go alone with a gentleman on an extended afternoon motoring trip. An automobile often stops without apparent cause and is sometimes in disrepair for hours or even all night. A party of young people should have a chaperon.

—Etiquette of Social and Official Life, 1901, excerpted in Three Cars in Every Garage.

Got your goggles and your chaperon? Let's go.

Without pressure from the developing car culture May Knight Rindge, who carried on her husband's fight to keep the county from railroading the right of way for a railroad through the ranch they both loved fiercely, might have prevailed. But the era of the automobile had arrived with a vengeance and nothing was going to stand in the way, not even the area's unpredictable and disaster-prone geology. May Rindge's determination, however, delayed other road-building plans indefinitely. Here's a look at what might have been:

In the end, the road building got out of hand. We've already had a look at the plan to build a six-lane freeway through Malibu Canyon and the even more outré Santa Monica Causeway, but by the time Caltrans released plans to use atomic bombs to blast new freeways through the mountains in the Mojave Desert in the early 1970s, even the most energetic road building lobbyists in the Auto Club were ready to say enough is enough.  (Although it may be hard to believe, the atomic civil engineering plan is not a figment of the author's over-active imagination, it was called the Plowshare Program, and they're still trying to mop up the mess made while testing how to use nuclear weapons for things like road construction).

Southern California's mountains are a graveyard for over-ambitious and abandoned freeway projects, but Roosevelt Highway—Pacific Coast Highway—remains a popular weekend drive, in addition to being Malibu's lifeline. Malibu had an estimated 363,000 visitors over Memorial Day weekend this year and summer hasn't even officially started yet. However, if sea level rise predictions are accurate, the ocean will eventually take back the road.


The fabulous Mr Toad, with his bombast and his passion for motorcars, steals the show in the Wind in the Willows, but it's wise old Badger whose words stay with one down through the years:

People come, they stay for a while, they flourish, they build, and they go. It is their way. But we remain. There were badgers here, I've been told, long before that same city ever came to be. And now there are badgers here again. We are an enduring lot, and we may move out for a time, but we wait, and are patient, and back we come. And so it will ever be.
—Kenneth Grahame, The Wind in the Willows

See you on the road. 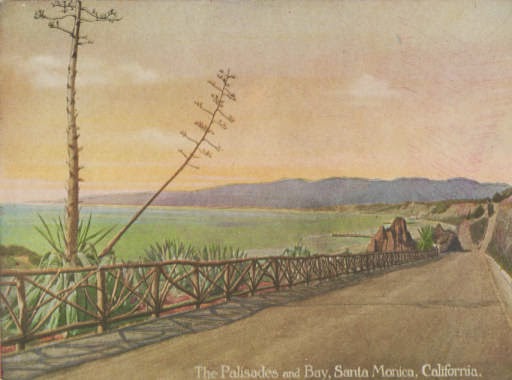 Posted by Suzanne Guldimann at 9:47 PM