The wind that makes music in November corn is in a hurry.  The stalks hum, the loose husks whisk skyward in half-playing swirls, and the wind hurries on. A tree tries to argue, bare limbs waving, but there is no detaining the wind.

November in Malibu is a time of warm days, cold nights, wicked winds, fiery sunsets, and an ocean pressed so smooth by the Santa Anas that it looks like watered silk. By Thanksgiving, almost all of the winter birds have arrived, while the last of the fall pilgrims are sent on their way by gale-force Santa Ana winds.

At Zuma, the beach once covered in brightly colored umbrellas and towels is now crowded with gulls. The blue lifeguard towers, like oversized sheep, are pastured well away from the reach of winter tides, and sand barricades are in place to protect lifeguard headquarters and the other county buildings along the beach from storms.

There’s a distinctly autumn smell in the wind, compounded of dust and eucalyptus and sun-baked chaparral. It’s a time of waiting. Everyone holds their breath, waiting for the winds to die and the red flag fire warnings give way to winter rain.

Dame Wendy Hiller, in the brilliant Pressburger and Powell film I Know Where I’m Going, is stranded by gale-force winds and prays for the wind to drop so she can cross to a small Scottish island where her fate awaits her. Anyone who has lived through a Malibu fire storm can appreciate the intensity of that prayer.

The Santa Anas go by a lot of names. Some people meld the syllables together to make the name Santana, others call these fierce desert winds the red wind, the devil's breath, or the devil's wind, but the winds apparently get their name from Santa Ana Canyon, in Orange County, where the phenomenon was reportedly once thought to originate.

It's unclear if the name was bestowed by Spanish settlers or later arrivals. However, the theories that the name derives from Satan or from an Indian word meaning evil wind seem to be entirely urban legends. It seems equally unlikely that the name comes directly from the saint, since her feast day is celebrated in July, a time of year when Santa Ana winds are least likely to occur. And the tempestuous Mexican military leader Antonio Lopez de Santa Anna, who is also sometimes credited for the name, also seems unlikely, since he never even visited California and had no part in its history.


The Chumash must have been very familiar with the winds, but their names for the phenomenon have not survived, although it's said that the name Simi derives from a Chumash term for the little white clouds that often accompany the wind.

Robert Fovell, a professor at UCLA in the department of Atmospheric and Oceanic Sciences, has examined the Los Angeles Times archive in search of the etymology of the name, but found nothing more exotic than the place name.

According to Fovell, the earliest reference to the Santa Anas in the Times dates to 1881, just one year after the newspaper began publication.

One of the items Fovell found in the Times archive is a letter to the editor complaining about the name and its connection to the community of Santa Ana:

In 1893, the Times published a complaint from an Orange County resident concerning the "the misnaming of the winds which blow at times over almost all portions of Southern California, and which, unfortunately, in some sections of the southern portion of the State are erroneously called Santa Ana winds." The name, the writer insists, leads "nine out of every ten persons in the East" to conclude that the Santa Ana wind is "peculiar only to the immediate vicinity surrounding and contiguous to the city of Santa Ana."

These winds are "an exceedingly unpleasant feature, especially in the fall before the rains have laid the dust." The writer recognizes that the winds "take the name of Santa Ana by reason of their passage through the Santa Ana mountain canyon, which is shaped very much like a large funnel" but insists it is "not a Santa Ana wind any more than it is a Los Angeles, San Bernardino, Riverside or San Diego wind."

You can read Fovell's interesting and entertaining article here but, sadly, you won't find proof of either saints or devils in it.

We aren't the only ones to experience this type of wind phenomenon. In the Alps it's the Foehn; in Provence, the Mistral; in Canada, the Chinook; in Argentina, the Zonda; and in Japan, the Oroshi.


Most of the winds of this type begin as cold air in an area of high pressure. As the cold air travels around the high pressure system (clockwise in the Northern Hemisphere; counterclockwise in the Southern Hemisphere) it gains speed and is squeezed into the surrounding low pressure areas. The wind is heated through compression and gains speed as it pours through mountain canyons like water down a drain.


Winds like the Santa Anas have a special Greek name: Katabatic, which means to drain, or  flow downhill. While the Santa Ana can reach speeds in excess of 70 mph, the Alaskan Williwaw, also a katabatic wind, has been clocked at over 140 mph.


In many parts of the world, this type of wind is thought to cause madness and illness. In Germany they even have a special word for it: Föhnkrankheit. In Southern California madness isn't nearly as much of a worry as fire. All of Malibu's major wildfires have occurred during Santa Ana windstorms.

Along with the fear of fire, the devil wind really does bring a host of lesser ills: migraines, allergies and nose bleeds, among them. Also static electricity that plagues the cats and transforms long hair into Medusa's snakes; downed trees, branches, and palm fronds; and clouds of dust that covers every surface. At the beach, wind-driven sand scours the shore. In the hills, the wind screams down the canyons, breaking branches, sucking the moisture out of the vegetation; and even tipping over the occasional cyclist or high profile vehicle.

On Sunday in western Malibu, where the Santa Ana winds can rip down the canyons at more than 60 mph,  six kayakers were swept out to sea. News reports stated that the squid fishers, anchored off Leo Carrillo, were able to rescue two of the kayakers. Lifeguards and Ventura and Los Angeles County emergency crews used jet skis and air support to reach the other four. The Malibu Times reports that the rescue effort involved 28 emergency responders.

Four stand-up paddleboarders were swept away the same day, this time near Surfrider Beach, according to the same article. Fortunately, there were no serious injuries in either incident.

Frederick Hastings Rindge, who purchased the entire Malibu Rancho in 1892, expressed an oddly optimistic view of the devil winds in his poetic collection of essays Happy Days in Southern California:

"At this season begin to blow the Santa Annas [sic], the fierce autumn wind storms, — dreaded, to be sure, but zephyrs, compared with cyclones. Three days they blow, and often precede a rain. They are a blessing in disguise, for beside their sanitary, microbe-dispelling effects, they also drive the dormant seeds hither and thither, to distribute them equally on the surface of the land. This task accomplished, down pour the early rains and up come, as by magic, the living green grasses out from the browned hills and fields..."


Joan Didion, also a Malibu resident for a time, takes a more fatalistic view of the wind in Slouching to Bethlehem:

“The violence and the unpredictability of the Santa Ana affect the entire quality of life in Los Angeles, accentuate its impermanence, its unreliability. The wind shows us how close to the edge we are."

Raymond Chandler paints yet another picture of the winds in his short story Red Wind:


“There was a desert wind blowing that night. It was one of those hot dry Santa Anas that come down through the mountain passes and curl your hair and make your nerves jump and your skin itch. On nights like that every booze party ends in a fight. Meek little wives feel the edge of the carving knife and study their husbands' necks. Anything can happen. You can even get a full glass of beer at a cocktail lounge.”


It isn’t all bad. When the winds drop we are left with the illusion of summer: bright sun and vivid blue sky and sea. Unexpected vistas are revealed: the Los Angeles skyline emerges from the haze and smog; the Channel Islands appear like the lost lands of legend out to sea. At night, the Point Fermin lighthouse flashes in the darkness, while Orion, his faithful hound at his heels, strides across a brilliant field of stars, once the red glow of sunset has faded.


The current round of Santa Anas is expected to die down just in time for Thanksgiving Day, leaving warm weather and calm skies. My mom remembers spending one of her first California Thanksgivings at the beach in Malibu on just such a day. For my parents, who both grew up in places with snow and ice from November until March, it seemed like a miracle. More than 50 years later, it still does.


November 22 marked the first anniversary of The Malibu Post. We've had nearly 13,000 visitors in the past 12 months. I am grateful and thankful to everyone who has taken the time to read these pages, but especially to my family, friends and neighbors. Thank you.

Wherever you are, and wherever you are going this Thanksgiving, dear reader, may the road rise up to meet you, and the wind be always at your back. 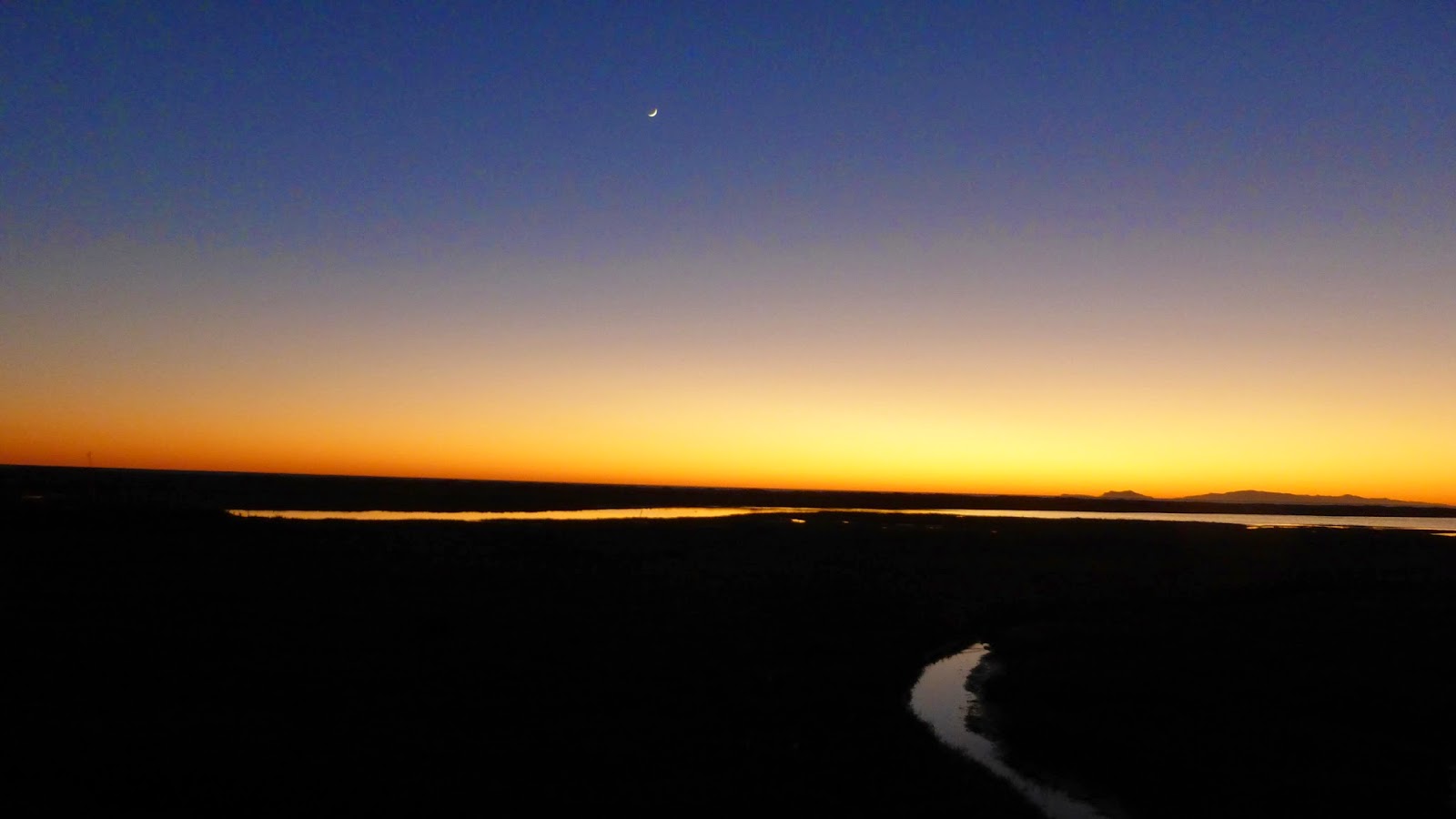 Posted by Suzanne Guldimann at 5:56 PM