In November, I reported on a talk by environmental artist Lita Albuquerque for the Malibu Surfside News. The talk was the third Malibu Salon Series event, sponsored by the Malibu Cultural Arts Commission. This was a rare opportunity to meet with a remarkable artist and visit her studio. You can read the article here. One of the things the artist said that continues to resinate in my imagination is:

"This place is interesting. The thing about Malibu is it faces south.”

Albuquerque explained that she views Malibu as a sort of natural solar and lunar observatory, enabling the observer to track the path of the sun and moon across the sky throughout the course of the year.

She suggested that Malibu residents who spend time outside observing nature develop an almost instinctive understanding of the annual path of the sun and moon across the summer and winter skies.

It's certainly true that the Chumash, Malibu's first residents, had a sophisticated knowledge of astronomy and the annual solar cycle. For the Chumash, as with so many other cultures around the world, the winter solstice, the shortest day of the year and the turning point when the days begin once again to lengthen, was an important occasion. Ethnographic records indicate that the moment of the solstice was observed with the aid of  a carefully prepared wooden pole that was used as a solar observatory. The arrival of the moment of the solstice was accompanied by ceremony.

The solstices and the equinoxes are still observed each year at the Wishtoyo Chumash demonstration village at Nicholas Beach—the ceremony reconstructed by contemporary Chumash elders and led each year by Chumash activist Mati Waiya. The event's organizers didn't respond to this reporter's request to cover the ceremony this year. However, the Malibu Times was invited and has good coverage of the event.


There is evidence that Point Dume, which faces due south, was once an important Chumash shrine site. Today, it is still a fine place to mark the solstice and to track the path of the sun across the sky throughout the year.

On the winter solstice—3:03 p.m. on December 21 this year, the sun reached its most southerly declination, which means that the North Pole is angled away from the sun to the farthest extent possible, -23.5 degrees.

For the Malibu observer, the sun at midwinter appears to rise south of due north—over Palos Verdes, instead of Los Angeles, and sets south of due west, over the open ocean. Although there is the potential for spectacular sunsets throughout the year, winter skies are often the most beautiful. The fact that the mountains aren't in the way as they are in summer when the sun sets farther north, is a contributing factor, so is the low angle of the sun, but the most important ingredient for a good sunset is clouds. There has to be enough cloud cover to catch the sun but not so much that the clouds swallow the light.

Sometimes weeks or even months go by without the slightest glimmer of celestial fire. May gray and June gloom are not conducive to sunsets: when there's too much cloud cover the day simply fades into darkness. But at any time of the year, when conditions are right, the sky is transformed into flame and glory.

This year seems to have have provided a surprising number of spectacular sunsets, or maybe  I was just fortunate to be in the right place to see them. At any rate, as the sun sets on 2014, here's a look at the past 12 months of sunsets.

The secret to catching a good sunset is simple: you have to make the time to go out and look for it. Any westward-facing location with an unobstructed view will do, but whenever conditions look promising, we try to head for the beach.  Zuma or Westward are marvelous places to watch the sun set. Other good local public sunset viewing places in Malibu are Bluffs Park, Nicholas and County Line beaches, Leo Carrillo's North Beach, and Point Mugu.

Here at the Malibu Post we find its always worth the effort. Even if the sunset doesn't materialize, it's an opportunity to look at the sky and the ocean, listen to the waves, and to breathe.  Sometimes we see dolphins or whales or sea lions. It's always a time for meditation and reflection, and sometimes we are rewarded with dazzling colors that grow more and more intense until they fade into darkness.

Whatever 2015 brings for you, dear reader, I hope it includes time to watch for sunsets. 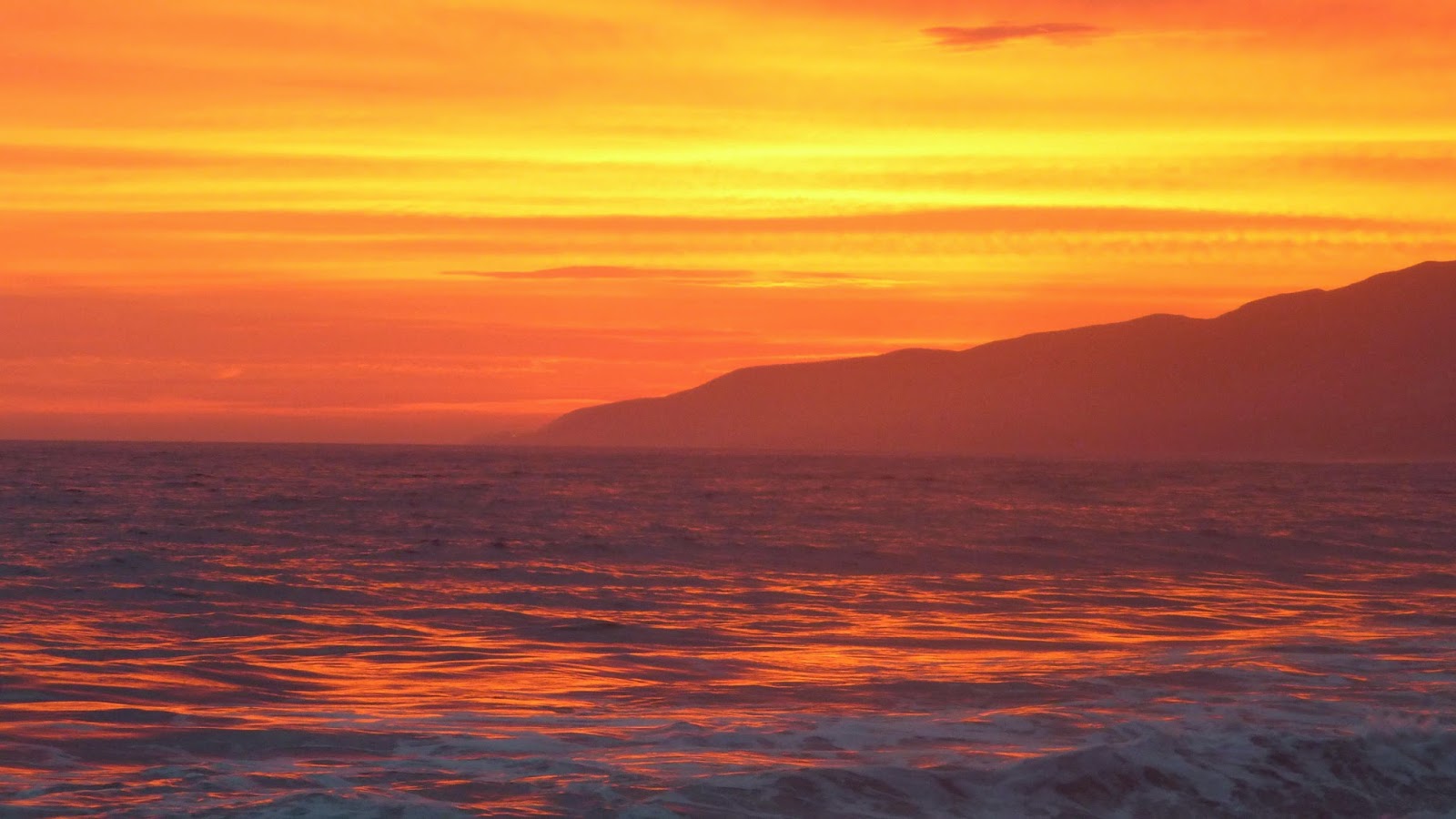 Posted by Suzanne Guldimann at 12:00 PM