He longed for the little cabin and the sun-kissed sea—for the cool interior of the well-built house, and for the never-ending wonders of the many books.”

In 1991 the City of Malibu incorporated and Walt Keller, the recipient of the highest number of votes in the newly created municipality’s first city council election, was named Mayor of Malibu, but he wasn’t the first person to receive the title. That honor goes to Tarzan creator Edgar Rice Burroughs, who was named unofficial Mayor of Malibu by his neighbors on La Costa Beach in 1932.

Burroughs was a literary phenomenon. He wrote dozens of bestselling pulp fiction stories set in exotic locales and filled with noble savages, aristocratic heroes, damsels in distress and despicable villains. His output included 25 Tarzan novels and 10 set on Mars, in addition to stories about a hidden world full of prehistoric wonders at the center of the earth, travels to Venus—which the science of the era envisioned as a jungle planet, westerns, historical romances and a series of contemporary adventures involving an alcoholic prizefighter.

However, Burroughs’ other major creation has been a multimedia moneymaking powerhouse for over a hundred years. The Internet Movie Database lists an astonishing 89 film versions of Tarzan’s adventures, ranging from a 1918 silent series starring Elmo Lincoln, to a film directed by David Yates scheduled to be released in 2016 and starring Swedish-born actor Alexander Skarsgard in the title role.

Tarzan has also had a long and successful career as a comic book character, the star of numerous TV shows, radio programs and cartoons, and has earned a place as a globally recognized cultural icon.

Burroughs was born on Sept. 1, 1875, in Chicago. In 1900, he married Emma Hulbert. The couple had three children. The family lived in Oak Park, Illinois, during the period when Burroughs' career as a writer began.

Tarzan the Ape Man, written in Burroughs' spare time, was published in serial form in 1912, swiftly followed by A Princess of Mars, the same year. By 1919 Burroughs was a successful author, and he and Emma and their three children were established on a ranch in a part of the San Fernando Valley that would come to be known as Tarzana in Burroughs’ honor.


“Edgar Rice Burroughs, author of the Tarzan stories and daily contributor of the Tarzan picture in The Times, has bought a beach home at Malibu,” an L.A. Times “exclusive” ran on Aug. 9, 1931. “The Burroughs’ home at Tarzana will be maintained only for the winter and early spring months. In the beach home is a specially fitted study where the author will continue to turn out his popular stories.”

According to the Los Angeles Evening Herald, Burroughs purchased a seven-room Mediterranean-style house with 40 feet of ocean frontage in August of 1931 for $25,000. It was one of the earliest houses on La Costa Beach.

May Rindge, the last owner of the Topanga Malibu Sequit Rancho, sold La Costa Beach in 1926 for $6 million to real estate developer Harold Ferguson to help defray the cost of litigation over government plans to open the rancho to public access. Ferguson planned the La Costa Beach Club, development streets and parcels, built a bunch of fake Spanish mission ruins to add a bit of Ye Olde California atmosphere, and began selling lots.

Today, La Costa Beach is part of the Great Wall of Malibu—wall-to-wall beach houses that almost entirely block the public's view of the ocean from the highway, but when Burroughs moved to Malibu there were only a few houses and a nearly 360-degree vista of unspoiled beach and mountains.

The 1930s were a prolific decade for Burroughs. ERBzine, “the official Edgar Rice Burroughs Tribute Webzine” lists fifteen titles that were published during the period when Burroughs was active in Malibu, including, Tarzan and the City of Gold, 1931; Pirates of Venus, 1931; Tarzan and the Lion Man, 1933; Swords of Mars, 1933; Tarzan’s Quest, 1934; Tarzan the Magnificent, 1935; and Back to the Stone Age, 1935.

“Lost on Venus,” serialized in the publication Argosy in 1933, appears to have been written at the Malibu residence. Here’s a thrilling synopsis:

Life on Venus had not been easy for Earthman Carson Napier. All of his courage and cunning were needed just to stay alive on the world of deadly monsters and even deadlier men. But Carson was determined to do more than survive. He had sworn to deliver the princess Duare to her treetop kingdom of Vepaja—even though a thousand miles of unmapped territory lay between him and his lofty goal. From the treacherous Room of the Seven Doors to the horror of Kormor, City of the Dead, attacked by the beast-men and imprisoned by the ruthless scientists, the reluctant hero battled his way across a world of unimaginable perils...

The film was a huge success, spawning numerous sequels. And while Burroughs appears not to have liked MGM's interpretation of Tarzan, he was a savvy entrepreneur in addition to being a prolific and imaginative writer, and successfully fought to hold onto the rights to his intellectual property.

In September of 1932, the Tarzana house was listed for sale, and Burroughs announced that he planned to move permanently to Malibu. 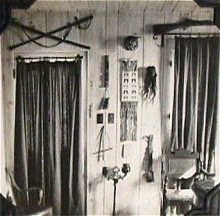 A letter dated Dec. 31, 1932, published in Brother Men: the Correspondence of Edgar Rice Burroughs and Herbert T. Weston, describes the construction of a second beach house adjacent to the first. The new structure, larger than the original residence “completely hides the old house.”

Oak Leaves, the Oak Park newspaper, announced the news on September 26, 1933: “A recent signal honor for Mr. Burroughs came a few days ago when he was elected at a town meeting—the "Mayor of Malibu," a fashionable ocean resort inhabited almost entirely by moving picture people and within a short distance of Beverly Hills, California.”

\
The title of mayor was purely unofficial and the duties appear to have consisted entirely of presiding over beach parties. Burroughs reportedly threw himself into seaside living with enthusiasm.

An article in the March 1938 issue of Fortune Magazine states: "Mr. Burroughs lives at Malibu among film people. Here he does much of his writing, rides horseback, plays tennis, and indulges in private flying, which he took up at the age of fifty-eight."

Burroughs’ time in Malibu was one of personal turmoil and transition but largely uneventful in terms of local historical events. However, the author provides the only known written account from Malibu of the devastating Long Beach Earthquake, March 10, 1933. The official Burroughs’ website, tarzan.com, summarizes the incident:

Ed and dinner guests are sitting in the Malibu residence study waiting for dinner when a major earthquake strikes just before 6 p.m. (The serious Long Beach Earthquake). Severe shaking and a ceiling that appears to move in circles send them out to Roosevelt Highway. The cook/server is most upset at the meal being ruined, having his table setting messed up and having to turn off the gas.

Despite continual aftershocks they manage to have dinner at 10 p.m. [Burroughs] counts at least 35 aftershocks over the next few days. Ed found the first shock to be rather thrilling but he finds the long string of aftershocks to be very hard to adjust to.


Burroughs divorced his wife in 1934, married actress Florence Gilbert Dearholt in 1935, and moved to Hawaii in 1940. The marriage didn't last, but Burroughs remained in Hawaii. He was in Honolulu during the Pearl Harbor attack. He received permission to become a war correspondent, despite being in his late 60s, and spent the war years in the Pacific. It’s unclear when Burroughs sold the La Costa property, but he returned to Tarzana after the war. ERB Inc., incorporated by Burroughs in 1926, still maintains an office on a small corner of what was once Burroughs’ 200-acre ranch.

One of Burroughs' two La Costa houses was bought by Elmer and Peggy Callen in the 1960s, and Peggy, a passionate advocate for environmental issues and a champion of Malibu cityhood, came within inches of being elected Malibu's first official mayor in 1976, during the community's second bid for incorporation. The measure lost by just 108 votes. The house is still there. It's been remodeled, but it hasn't yet been replaced by a mega-mansion like many of its neighbors.

Burroughs died in 1950. He is regarded today as one of the 20th century’s most successful authors, and his most popular works have remained continuously in print. It seems appropriate that the honorary title of first mayor of Malibu goes to a legendary writer, one who forged his own enduring mythology.

The quote at the beginning of this article is from author Edgar Rice Burroughs’ best known book, Tarzan of the Apes, but the sentiment was one Burroughs appears to have shared with his creation. In Malibu, for a little while, at least, he had all of those things.

Posted by Suzanne Guldimann at 1:56 PM