For the Malibu Post's 2015 Christmas article I shared some memories of the wonderful—and to a small child, utterly enchanting—McCoye tree farm in Latigo Canyon. Last month, I had the opportunity to meet with Arthur Bradley Fowler, T.O. McCoye's grandson. He shared many memories of his grandfather and the amazing ranch that occupied more than 100 acres along Escondido Creek, as well as details about his grandfather's career in real estate in Playa del Rey in the 1920s and 30s, which is the subject of Brad's book T.O. McCoye's Playa del Rey.

That interview became the basis for an article in the Malibu Surfside News, which you can read here.

In the article I wrote:

Thurlow Orrin McCoye had already enjoyed a long and successful career in real estate when he moved to Malibu in 1959. McCoye, born in 1893, is said to have sold the first lot in Playa del Rey, and opened the community’s first grocery store. His daughter Barbara is credited as the first child born in the newly created town in 1915. For 50 years, McCoye sold real estate in Playa del Rey and Venice, before he purchased more than 100 acres of his own in Latigo Canyon.

McCoye transformed his Malibu retreat into his own terrestrial paradise, planting a fantastic garden of tropical fruit trees, a grove of redwoods, and building woodland pools and fern grottos. The ranch was also home to a Christmas tree farm, complete with a three-story Christmas tree-shaped tree house, that became part of holiday tradition for local families in the 1960s and ’70s.

McCoye died in 1981, but many of the exotic trees continue to thrive, and the property is full of reminders of its owner—stone walls, a labyrinth-like spiderweb of rocks, and stones with inspirational messages carved into them—but the property burned during a catastrophic wildfire and the history of the retreat vanished so completely that when the Mountains Recreation and Conservation Authority acquired 86 acres of the former McCoye property in 2013, Paul Edelman, the MRCA deputy director, was quoted as saying, “No one’s sure exactly who, long ago, created a little bit of a Shangri-La on the property.”

James Hilton's Shangri-La, created in 1933 in the shadow of WW II, was described by its creator as a lantern of knowledge and wisdom, one that could rekindle civilization if the war plunged the world into another dark age.

I learned from Brad Fowler that his grandfather's little bit of local Shangri-La was, in its own way, also made to be a beacon. T.O. McCoye was passionate about organic farming, medicinal herbs, and natural foods, long before they became mainstream.

McCoye dreamed of making his ranch into a botanic garden. Thirty years after his death that dream became, in a way, a reality, and the main portion of the property is preserved, if not as a botanic garden, at least as open space.

There wasn't room in the newspaper to include the photos of the garden that Brad shared with me, but he has kindly given me permission to put them on The Post, so here's a glimpse into that "little bit of Shangri-La."

Brad Fowler's book about his grandfather, T.O. McCoye's Playa Del Rey: the Homes, the Views, the People, Circa 1920s and 1930s, is available via Amazon, and offers a fascinating look at a lost chapter in Los Angeles history through dozens of his grandfather's photos and a fantastic collection of ephemera, but it doesn't include the Malibu years (despite the headline of the Surfside News article).

It's alarming how fast local history vanishes, but at least in this instance, visitors to Weintraub Family Park, as it is called now, will still come away from the experience with memories of a little bit of Shangri-La, regardless of the name attached to it. And thanks to the Conservancy, T.O. McCoye's garden retreat will continue to welcome fugitives from the routine and ordinary world. 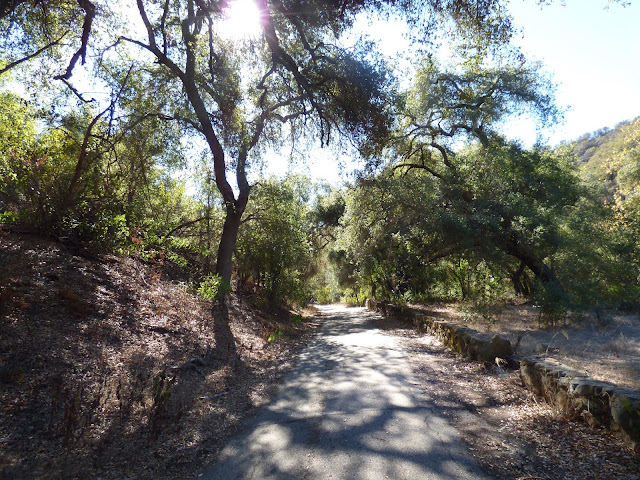 Posted by Suzanne Guldimann at 10:09 PM