“Beware the Jabberwock, my son!
The jaws that bite, the claws that catch!
Beware the Jubjub bird, and shun
The frumious Bandersnatch!”

Around here, shunning the ichneumon, velvet ant, and especially the tarantula hawk might be sound advice, too.

I was on a walk recently with visitors from Colorado. They marveled at how few biting bugs we have in the Santa Monica Mountains. It’s true, mosquitoes and black flies are mercifully few, but we still have quite a few stingers, many of them strange enough to be entirely at home in Wonderland.

Let’s meet some of them, shall we?

With Scorpio, the largest and brightest of the summer constellations, dominating the night sky, it seems appropriate to start with this celestial creature's terrestrial counterparts. Although we tend to describe them as bugs, scorpions aren't insects, they're arthropods in the family Arachnida. Although there are four scorpion species in the Los Angeles area, the varieties most often found in Malibu are Paruoctonus sylvestrii, the common California scorpion; and Vaejovis spinigerus, the striped-tailed scorpion.

Our scorpions rarely exceed two inches in length, but they are fierce nocturnal predators, able to subdue insects nearly their own size. Fortunately, they aren’t reportedly aggressive towards humans and prefer to avoid confrontation. In fact, although scorpions are common in the Santa Monica Mountains, many residents have never seen one.

The best way to spot these elusive arthropods is at night with an ultraviolet light, because the scorpion’s entire exoskeleton fluoresces under UV light—a recent theory proposed by biologist Douglas Gaffin of the University of Oklahoma suggests the fluorescent pigments may act as a light receptor for the scorpion—an eyeless way of seeing. Here's a link to a 2012 article in New Scientist.

An inexpensive UV flashlight makes it easy to spot scorpions at night. Although, ignorance is perhaps bliss. I was astonished to discover just how many scorpions are out there and I have no intentions of ever sitting on the ground again at night. Photo © 2014 S. Guldimann

I’ve been on several nighttime scorpion walks in the Santa Monica Mountains and I am astounded to find how many scorpions are out there. The fact that stings are so uncommon is a testament to the shy and retiring nature of these reclusive hunters.

Most stings occur when humans inadvertently disturb scorpion hiding places, including woodpiles and garden furniture. Scorpions have also been know to seek shelter in shoes left out overnight on the doorstep or in the folds of beach towels and other laundry left out to dry.

None of Malibu’s scorpion species are regarded as a dangerous and both the common scorpion and the striped-tail are apparently popular species in the pet trade. Both have a painful sting—victims compare it to a wasp sting—but it only poses a health hazard to individuals with severe allergy to the venom.


Scorpions are beneficial, eating many times their own weight in insects, so peaceful coexistence—whenever possible—is the best way of dealing with them. Besides, they're all around us, whether we know it or not.

There's another seldom seen Malibu resident with a painful sting: the soil centipede. This beastie is a type of Strigamia centipede. It's fast moving, lives under rocks and garden pots and will bite anything that it senses is a threat. Soil centipedes are eyeless and don't actually have teeth or stingers—they "bite" their prey—and the hand of any gardener unlucky enough to come in contact with them—with a pair of specialized legs that are used like fangs and connect to venom sacs in the body. It's a painful bite but reportedly not dangerous.


Scorpions and centipedes are all very well, but the serious sting awards go to three members of the wasp family. These insects are usually shy and reluctant to sting, but when they do they have a formidable weapon.

All three wasps are eye-catching and have vivid coloring, probably intended to warn would-be predators to stay away. It's a warning humans would do well to heed. The Tarantula Hawk has the distinction of being second only to the bullet ant on Schmidt's pain scale. He rates the sting of this wasp as a 4, and adds “…immediate, excruciating pain that simply shuts down one’s ability to do anything, except, perhaps, scream. Mental discipline simply does not work in these situations.”

This spectacular insect really does prey on tarantulas, which is why it is armed with such a formidable weapon. The female tarantula hawk paralyses the tarantula with her sting and lays her eggs in the unfortunate arachnid, which she will drag to a preselected and prepared hole or burrow, where it will serve as a food source for the next generation of tarantula hawks. And you thought Malibu politics were nasty.

On a practical note, wearing gloves and shoes while working in the garden can help prevent some encounters with stingers. Many Malibu bee stings happen on the beach, where bees congregate on the wet sand to find salt. A pair of flip flops can help prevent beech bee stings, but some bites and stings are unavoidable—yellowjacket wasps win the award for general orneriness and often appear to sting without provocation, and even in Malibu in the middle of the worst drought in decades, mosquitoes are still out for blood.

It's a good idea to keep Benadryl in the first aid kit for sting emergencies. Anyone with sting allergies should make sure they have an up-to-date EpiPen on hand, as well. Here at the Malibu Post we like  "sting ampules."  These are tiny, individual tubes of benzocane that are easy to carry and can be applied to give temporary relief from all kinds of stings. I've never seen them at a store, but Amazon sells a cheap and effective brand).  Cortizone cream, Caladryl lotion and the kind of first aid cleansing spray or wipes with Benzalkonium Chloride and Lidocaine are also  helpful. Ice helps reduce the pain and swelling from most types of sting, although some respond better to heat. In all cases prevention is much preferable to any sting remedy, no matter how efficacious.

The beautiful and deadly tarantula hawk embodies the dichotomy of the insect world: they share our world—or, rather, we share their world, since there are a lot more of them than there are of us, but often they inspire fear because they appear strange or have the ability to defend themselves with powerful chemical weapons. Most stinging "bugs" are beneficial and serve an important function in the local ecosystem. Learning to coexist is important, and offers us a look at a world as weird and alien as anything in fiction, and sometimes also a glimpse of something rare and surprisingly beautiful. 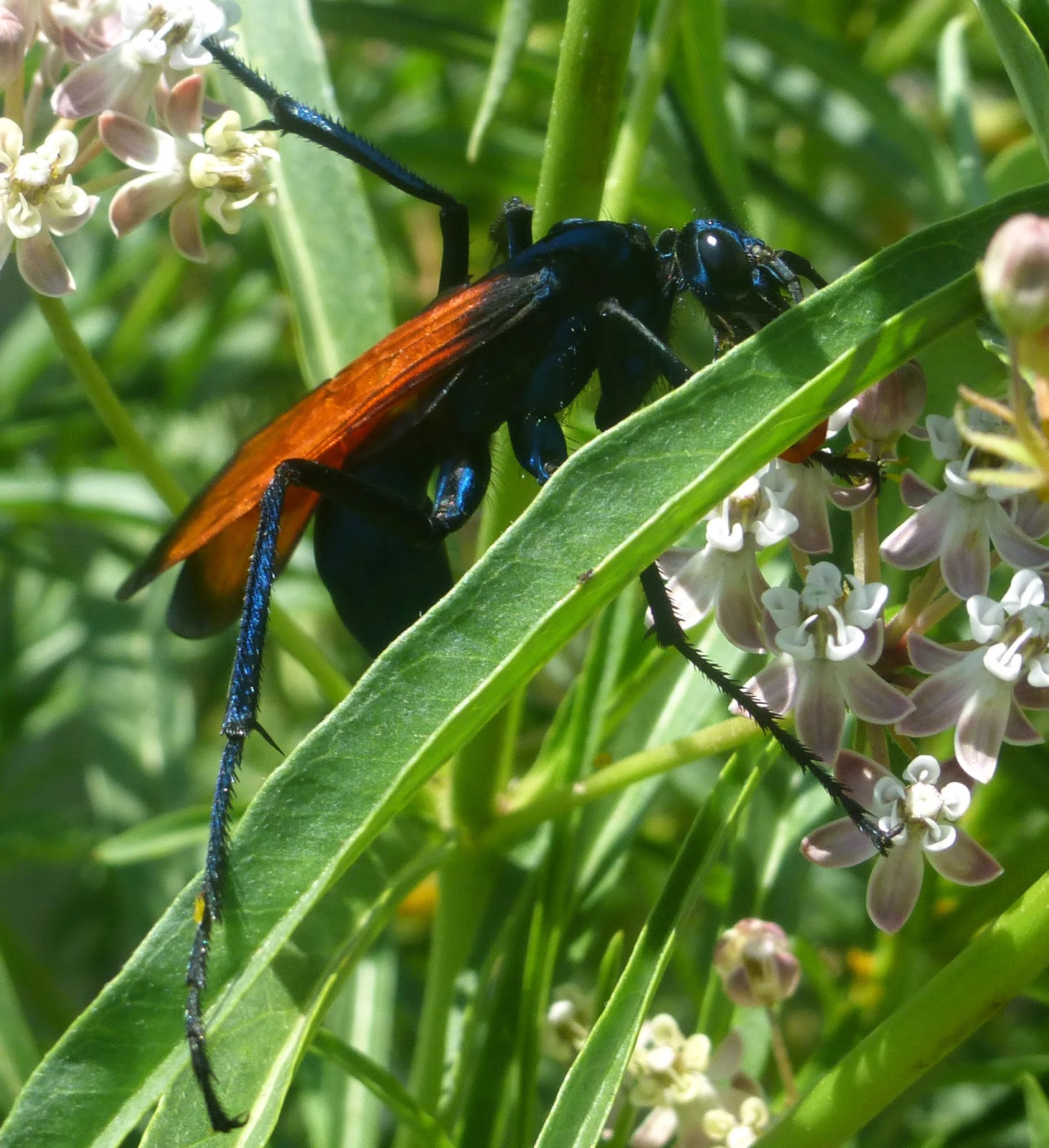 Posted by Suzanne Guldimann at 10:18 PM