A Walk in the Park


October in Malibu Bluffs Open Space Park offers vistas of dusty golden fields and wind-swept blue sea and sky. The meadowlarks arrived this week, from wherever they spend their summers. Cold air collects at the bottom of the ravines over night and lingers into the morning hours, offering early walkers a taste of winter and the concentrated fragrance of laurel sumac, sagebrush, and skunk musk—a sort of distillation of autumn in Malibu.

The open space is a small park—just 83 acres. One rarely encounters more than a few other visitors. You might meet a wedding party taking photos, or neighbors walking their dogs. If you are there early enough or late enough you might see a family of coyotes hunting mice in the meadow, or the shy elusive bobcat that lives in the canyon. There are almost always raptors in the dead eucalyptus trees by the highway, and in a wet year the park is full of flowers, some of them common, some rare. So how did this small, quiet place end up being at the center of a maelstrom of campaign accusations during the 2016 city council race? Let's take a look.

Although Malibu Bluffs Park is a small area, it was a top priority on the Coastal Commission's first acquisitions list in 1976, together with the Point Dume Headlands. Nearly 100 acres on the bluff were purchased by the state in 1979 with the first bond money available for coastal conservation.

The city was able to buy 10 of those acres from the state as a permanent home for our community's ball fields, after the local Little League was forced to move out of Malibu Lagoon. Through a complex deal that money was used to purchase King Gillette Ranch in the heart of the Santa Monica Mountains, the ball fields got to stay on the bluff, Malibu was able to build the Michael Landon Community Center, and the remaining 83 acres of open space were transferred from State Parks to the Santa Monica Mountains Conservancy to manage, which it did by mostly leaving the property alone, until the plan for placing campsites on the site emerged, kicking off a massive battle.

In the aftermath of that battle, and with a different city council at the helm in Malibu, the City of Malibu traded its 590-acre Charmlee Wilderness Park to the Santa Monica Mountains Conservancy for Bluffs Open Space. The swap is still not complete. Both parties agreed to a five-year exchange to determine if the properties could be developed in the way desired.

At Malibu Bluff Parks Open Space, the City of Malibu is seeking four baseball fields, an aquatic center, a skatepark, a dog park, an amphitheater, basketball courts, a tot lot, lawn areas, a community/visitor center and all of the necessary infrastructure to make that a reality, including ancillary structures like pool pumps, restrooms, batting cages, storage sheds, parking areas, driveways and at least one new entrance from Pacific Coast Highway.

A master plan has been developed that reconfigures the city's existing 10-acre Bluffs Park and incorporates a nearly two-acre parcel that will be donated by the developer of the adjacent five-house subdivision, as well as mapping out the amenities the city is seeking to construct in the open space portion of the park.

The plan includes relocating and replacing the Michael Landon Center with a new, larger visitor/community center, moving the two existing baseball diamonds to the central section of the open space park and adding  a Pony League field and a softball field, and rearranging the current field area to accommodate three soccer or mixed use fields.

The problem with this plan is that when the Conservancy wanted to place campsites at Bluffs Park, the city went through great lengths to argue that the whole park was Environmentally Sensitive Habitat Area, where nothing can be built. The city attorney has stated that the park is ESHA on the record to the Coastal Commission and the city's official overlay map showing ESHA supports that.

Now that the city wants to build amenities on the park the argument is that there isn't that much ESHA after all. However, ESHA isn't the only concern. Bluffs Park Open Space has plenty of interesting geologic features, including numerous landslide areas and a large section of the Malibu Coast Fault. 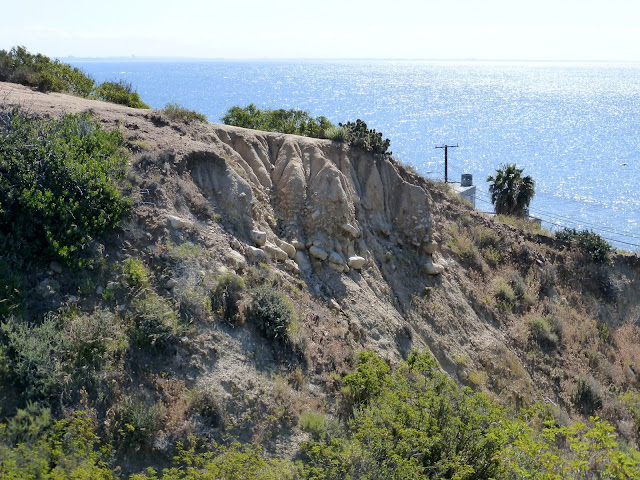 Now let's take a look at this quote from a letter to the editor that ran in a recent issue of the Malibu Times:


"...If the slate is elected, they will constitute a majority vote of council and, as promised, will kill any community-supported plans for Bluffs Park for the next four years. By then, the swap with the Santa Monica Mountains Conservancy will have expired and the conservancy will once again have ownership and control of Bluffs Park.

Most residents are unaware that in 2010, the Coastal Commission approved the conservancy’s plans to add 35 campsites to Bluffs Park. Therefore, by “stopping the swap” the “Band of Three,” commonly referred to as the slate, will have succeeded in eliminating much-needed sports fields and other recreational amenities for all Malibu and, instead, provided us with a regional campground in the heart of our beloved town. What a horrible thought."


The slate refers to City Council candidates Skylar Peak, Rick Mullen and Jefferson Wagner.  The author of this letter appears to be unaware that the Coastal Commission, not the city council, will have the final say on what can built at Bluffs Park. He also appears unaware that the city, not the Conservancy, has the final say on whether the park can be used for campsites.

Perhaps he is also unaware that Rick Mullen played a major role in the incredibly difficult legal battle to ensure that the city retained the right to make that determination. You can read about it in Rick's own words here.

The letter quoted above is just one of several spurious attacks on these three candidates over Bluffs Park. None of these letters mention the property's constraints, or that even if the ballfields and the skatepark are off the table because of the environmental constraints, the city council could still decide that the prospect of athletic facilities on the western mesas is worth pursuing. It's even possible that the city might keep the park as a—what a novel concept—open space, and seek a flatter, less controversial, less geologically active and less environmentally sensitive area to build the other athletic facilities.


There is nothing wrong with recreational facilities. Every community needs places were residents of all ages can participate in activities like organized sports and art and enrichment classes, but the location for those amenities needs to be appropriate. It's great the city has taken the time to collect community input on Bluffs, and that they are currently going through the same process at our newly acquired Trancas Fields Park, but the land and the resources on it must ultimately dictate the use. At Bluffs, one could argue that we appear to have created a wish list full of wonderful things but forgot to start with the physical constraints of the site. It's like buying a fantastic piece of furniture at an estate sale and only realizing that it doesn't fit through the front door when you get it home. That's why an environmental impact report and the Coastal Commission approval process is so important. And it is also why electing the right city council to represent us is critical.

The author of the letter is correct when he states that the "Band of Three" would ensure a council majority. From the perspective of conservationists and keepers of Malibu's history, this would be a good thing, because Peak, Mullen, and Wagner have not only vowed to uphold the Mission Statement, they all have a documented history of actually doing so that has been chronicled in the local media.


Regardless of who is elected in November, the Malibu City Council, not the Conservancy, has the final say on camping at Malibu Bluffs Park. Even if the swap doesn't come to pass and the city reclaims Charmlee and hands Bluffs back to the Conservancy, any camping facilities that the SMMC proposes for Bluffs Park would have to be approved by the city.

In both scenarios, the California Coastal Commission has a key role in determining what can be built, and because the proposed development falls under the designation of "public works project" it can be appealed to the Coastal Commission if residents or environmental organizations have concerns that they feel were not adequately addressed by the city.

We've talked a lot about the Malibu Mission Statement this election cycle, but this is exactly the kind of situation that document is intended to address. Does the proposed development meet the goals of the Mission Statement? If it doesn't, can it be rethought, redesigned, scaled back? For too long, the city has relied on variances to make things fit, and it has fallen to residents and environmental organizations to appeal these patched together projects to the Coastal Commission.

Camping may not belong on Bluffs Park, but it's time we stopped thinking of it as "horrible." It's especially discouraging when appointed officials cling to this mindset. A city-owned campground would be a good way to ensure low cost visitor serving amenities are available in Malibu on our terms, with no fires and a year-round live in camp host to keep an eye on things. In other coastal communities this has been a successful way to meet the needs of visitors and even raise revenue. Maybe we aren't there yet, but it would be nice if this was a conversation we could eventually have.

The statement about "eliminating much-needed sports fields and other recreational amenities for all Malibu and, instead, provided us with a regional campground in the heart of our beloved town" isn't based in fact. It's just election scare mongering. That's why its so important to listen to what the candidates say, and more importantly what they have actually done, not what's said about them.

Posted by Suzanne Guldimann at 10:43 AM

Suzanne Guldimann is an author, journalist, artist, musician, and a lifelong Malibu resident. She is the author of Life in Malibu, and nine books of music for the Celtic harp, available on Amazon. She is also the associate editor of the Messenger Mountain News and a contributor to the Malibu Surfside News.